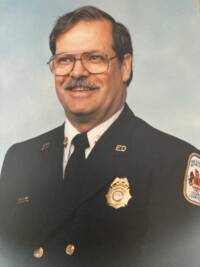 Larry Benton Johnson passed away surrounded by his family on April 20th, 2021 at the age of 80.

Larry was born in Johnston, North Carolina on July 30th, 1940 to Ira B. Johnson and Cartha E. Parker. Larry began his career with the fire department as a volunteer, and quickly became a paid firefighter in 1966. He worked his way up the ranks and eventually became a Battalion Chief. When Larry retired from the Fairfax County Fire Department in 2002, he had been with the force for 36 years.

On July 6th 1963, Larry married Harriet Enoch. The two of them enjoyed over 57 years of marriage together. Larry became a father in the 1960s with the birth of his son, Andy and his daughter, Cheryl. Despite his dedication to his career, it was always very clear that his family was his greatest passion and joy.

Larry was a devoted father, educator, and enjoyed life to the fullest capacity. He enjoyed nature and hiking, taking many trips to Skyline Drive with family and friends. He was a fan of sports, particularly baseball and football, and he always stood by the Redskins and Nationals no matter how bad their seasons. Larry brought so much joy to the lives of everyone who knew him, and he will be deeply missed by so many.

The family request that in lieu of flowers that donations be made in Chief Johnsons honor to:

Offer Condolence for the family of Larry Benton Johnson