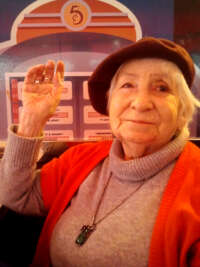 On February 2, 2022, Mrs. Tamara Ovseevna Poletica (née Natansohn-Aizenberg) died peacefully in her sleep at the age of 100 at her home in Arlington, Virginia, surrounded by members of her loving family. Mrs. Poletica was born in Petrograd (now Saint Petersburg, Russia) on June 10, 1921, during the height of the Russian civil war. Her father was an accountant and mother had a dental practice, having recently been volunteering on the front lines as a nurse. Her grandfather Refuil Natanzon had been a member of the Imperial Russian Senate. As a young girl, Tamara was entrusted into the care of a governess, a baroness who had served the Russian empress as a lady-in-waiting but was then stranded in Russia until one night, her governess disappeared.

Tamara’s university education was interrupted by the Second World War during which time she was commissioned as an officer in the Red Army and served as a nurse during the horrible siege of Leningrad, when both her parents died of starvation. Toward the end of the war, Tamara was evacuated to Saratov where she met and married her first husband, Mikhail Achstein, a Polish officer prisoner of war.

After the war Tamara and her husband separated, her husband returning to Poland, and Tamara remarried, this time to the renown Ukrainian historian, Nikolai Poletika (Mykola Poletyka). Having been denied the opportunity to defend her doctoral dissertation on the excuse that quotas for Jews were already met, Tamara became a researcher and editor to her husband. During the post-war political purges, Tamara and her young daughter Regina went into voluntary exile to Uzbekistan but then were able to return to Leningrad and later moved to Minsk in present-day Belarus.

In the late 1960s both Tamara and her daughter Regina became involved in the dissonant movement, and after Regina managed to flee the Soviet Union in 1972, Tamara was arrested by the KGB and underwent intense interrogations for a year until the personal intervention of Mrs. Nixon and Sen. Henry “Scoop” Jackson gained Tamara and her then retired husband the freedom to emigrate to Israel, where they joined their daughter. Tamara began a new career as a news editor at the Voice of Israel Russian division.

Shortly thereafter, her daughter married an American, and moved to the United States, and in 1982 Tamara joined her family in the States, eventually becoming a naturalized citizen, an honor she cherished. Tamara loved to travel, and when her son-in-law was transferred to Spain with the U.S. Government, Tamara took advantage of the many travel opportunities, mainly around Spain, Portugal, France, the United Kingdom, Germany, and many other European countries. She eventually settled in Arlington, Virginia where she lived the last 30 years of her life enjoying the cultural opportunities offered in the Washington, DC area and serving as a major influence on her grandchildren.

Tamara is survived by her son-in-law, William Barker, her three grandchildren, Raphael Barker, Veronica Barker-Kelly, and Elena Barker-Kerrinckx, and two great grandchildren, Dov and Ellory Barker. Her daughter, Regina, pre-deceased her. A memorial service, in keeping with Jewish custom, was held for her immediately after her death at Cunningham Turch Funeral Home.