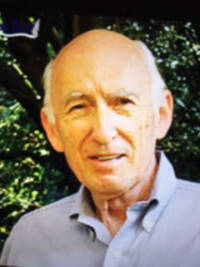 Bob Bergin, like his beloved cats, had many lives. While a student at Villanova in English Lit he enlisted in the U.S. Army, the sole GI on the troop carrier to Japan not to be seasick in a typhoon. He rode his beloved Yamaha motorcycle all over Japan, taught English to high school students and rode cross country on the Yamaha on his return to the U.S.

Bob joined the Foreign Service, interrupting his MA studies in English Lit at Georgetown University and his sky-diving hobby, to begin Vietnamese language studies. He had volunteered for his posting in Saigon and witnessed firsthand the TET offensive and the attack on the U.S. Embassy. Tours in Thailand (twice), Indonesia, South Africa and Kenya followed.

In 1986, he and his wife Monique, started their Asian antique business, Banana Tree. They opened their shop on King Street in Alexandria in 1988. When not hunting art treasures for Banana Tree, Bob pursued other interests in Asia. He worked closely with the Foundation for the Development of Thai Aircraft and with groups involved with the recovery of WWII aircraft in Asia. He maintained a special interest in the American Volunteer Group (AVG) “Flying Tigers”, one of the most effective and colorful combat units in the history of aerial warfare. His many articles on these subjects are often referenced.

In recent years his writing interest expanded to include OSS and Free Thai operations. On visits to China, he pursued interests in WWII aviation and the People’s Liberation Army Air Force (PLAAF). He is the first American writer to be given interviews with senior PLAAF combat pilots, including a leading MIG-15 ace, and a PLAAF attack pilot involved with China’s nuclear program who became the pilot to drop China’s first H-Bomb. The resulting article published by the Smithsonian Air and Space magazine was selected by the New York Times for their weekly Must Read Section.

Bob wrote 4 novels, all set in Asia, and numerous short stories, two of which appeared in Evergreen Review.

He moved on to his next life on June 9, age 83, where hopefully there are airplanes, Thai food, good word processors, old friends and cats.

Offer Condolence for the family of Robert C. Bergin