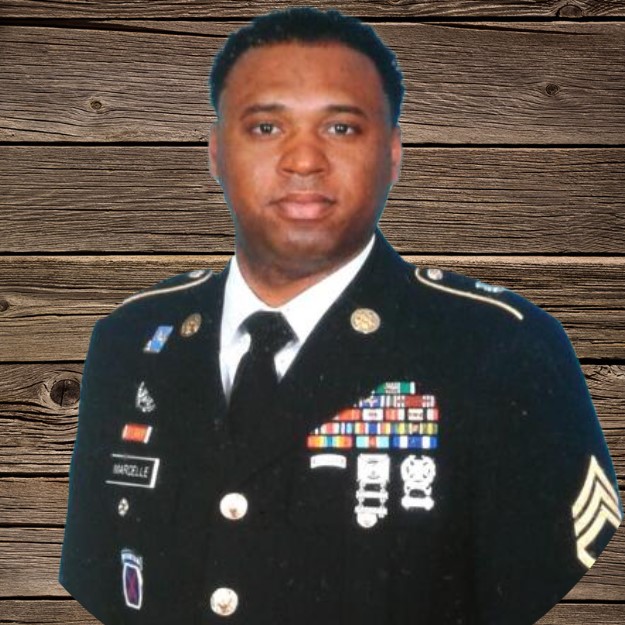 Warrant Officer 1 (WO1) Marvin Sheldon Marcelle was born on October 20, 1984 in Port-Of-Spain Trinidad, to Maria Chambers, formerly Marcelle and David Marcelle. Marvin attended Morvant Laventille Secondary School in Trinidad and graduated at the age of 17. On December 11, 2001, he immigrated to the US and attended Woodlawn High School in Baltimore County, Maryland the following year, from 2002-2003. Marvin enlisted in the United States Army Reserve as a Cargo Transportation Specialist in 2003 and attended Basic Combat training at Fort Jackson, South Carolina. In 2004, Marvin switched from the Army Reserves to Active duty and attended Advanced Individual Training (AIT) at Fort Eustis, Virginia where he would stay and serve his first assignment as a Transportation Specialist. He would serve in various leadership positions in this role to include his first and second deployments to Iraq in 2005 and 2006, and a deployment to Afghanistan in 2010.

In 2012, Marvin was selected to become a Counterintelligence (CI) Agent and was assigned to the 525th Military Intelligence Brigade in Fort Bragg, North Carolina. He would deploy to Afghanistan as a CI agent in 2013. In 2015, he deployed again to Kabul, Afghanistan as a CI Team leader responsible for CI support to the headquarters for all Coalition Forces in Afghanistan. In 2016, Marvin served in a CI detachment at Fort George Meade, Maryland. In 2019, during the year of the novel COVID 19, Marvin bravely took an assignment to serve as a CI agent in Camp Humphreys and Camp Carroll, Korea. And last year, in 2020 Marvin was selected to become a Warrant Officer. He was promoted from Staff Sergeant (SSG) to Warrant Officer (WO1) on August 12, 2020. Following his graduation of Warrant Officer Basic Course (WOBC), WO1 Marcelle was stationed in Grafenwoehr, Germany in May 2021 to serve as a leader in a CI detachment.

Marvin met Zaquinna Hynson, a military service member, while on their deployment in Baghdad, Iraq. They got married in February 2009 and had a son, Ramadi Marcelle, in April 2010. They divorced in 2014, and went on to co-parent Ramadi throughout the years.

Offer Condolence for the family of Marvin Marcelle