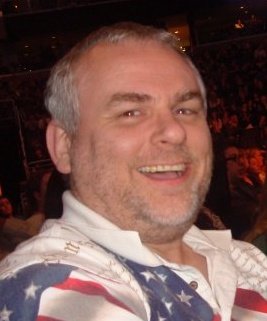 James “Jim” Lee Habermehl, age 58, passed away surrounded by his daughters on Monday, April 19, 2021. He was born June 5, 1962, in Milwaukee, Wisconsin, and always considered Cream City his home.

Upon completing his degree at Milwaukee School of Engineering, Jim joined the Air Force. Jim retired as a lieutenant colonel after an accomplished career in military intelligence. He carried a whole-hearted passion for democracy and perpetuating American values.

Although Jim’s military career was peppered with stations nationally and abroad, stability came with his three daughters, Heather, Jessica, and Angela, whom he shared with his former spouse, Dawn. Watching his daughters grow up and all graduate college gave him pride that he was happy to share.

Jim lived with his family for many years in Dale City, VA, while working as a patent examiner at the USPTO. He loved Western movies, war history, and playing games. He spent his last two years in retirement, enjoying the company of family and friends and playing in his 43-year D&D campaign.

Jim will be forever remembered for his unfathomable capacity to care about others, his proficiency in witty conversation, and his eternal devotion to his family.

Jim is survived by his daughters, Heather (Brian) Johnson, Jessica, and Angela; his grandchild, Theodore Johnson; and his former wife, Dawn. He is the youngest among his siblings, Robert Jr. (Sylvia), Alan, Wendy (Scott Dunnington), and Neil (Kanthia), and he is the first of them to join those who went before: his parents, Robert Sr. and Doris.

Offer Condolence for the family of James “Jim” Lee Habermehl