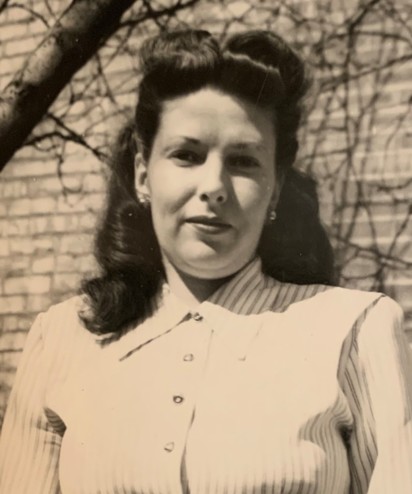 Long time Annandale resident Helen Winter died on May 1, 2021, following a brief illness. Helen was born on June 4, 1926 in Pendleton, Indiana, to Otto Estel Parker and Maude Helen Hook. She married William [“Bill”] Darrell Winter on May 17, 1946 following his service in World War II as a Naval Officer. They had four children Valerie Ann Cognevich, Vicki Louise Winter, Darrell Reid Winter, and Dann Edward Winter. They have nine grandchildren, nine great grandchildren and one great great-grandchild. Following her first career as a mother to her four children, Helen received an Associate Degree from Northern Virginia Community College in 1977. It was followed by a Bachelor of Science (Cum Laude) in 1980, and a Master of Education in Guidance and Counseling in 1984, both from George Mason University. Helen’s professional career included managing Parkerson’s Typewriter Store, personnel management for Giant Food,
Inc., and substitute teacher for the Fairfax County School District. With her husband and family, Helen lived in Fort Wayne, Indiana; Atlanta, Georgia; New Orleans, Louisiana; and, finally, Annandale, Virginia where she has lived since 1969. Helen was active in the Annandale community. In 1993 she was crowned Lady Fairfax, in 1997 she was named “Citizen
of the Year” by the Annandale Chamber of Commerce and in 2008 Grand Marshal of the Annandale Parade. In 1988 she received a Special Commendation for the Take Pride in America Campaign. In 2003 she was named “Citizen of the Year” by the Mason District Council of Civic Organizations and was entered into the House of Representatives Congressional Record by Thomas M. Davis III. She was a four-time winner of the Pinecrest Woman’s Golf Association Tournament and in 1979 she won the Giant Food, Inc., Tennis Tournament. Helen was also an avid bridge player, a member of the Annandale Methodist Church, a member of multiple civic organizations including the Annandale Women’s Club and Clean Fairfax Council for which she dedicated countless hours over decades making beautification and environmental causes her priority. All will miss her beautiful smile, her upbeat attitude, and her contributions to environmental causes and beautifications.
Helen’s loving family included her children Dann Winter, Darrell Winter, Vicki Winter, and Valerie Winter Mitchell Cognevich, and grandchildren Cara Winter, Ashley Winter Kirschner, Renee Winter, Jody Jacoby, Nick Cognevich, Kimberly Mitchell. Mindy Mitchell Bernard, and Bryan Prilliman. Helen was predeceased by her husband, Bill; daughter, Valerie; and granddaughter, Kimberly.

Offer Condolence for the family of Helen Louise Winter