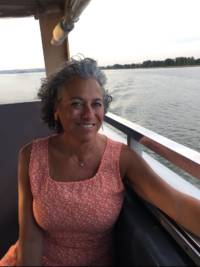 On July 14, 2019 our beloved wife, mother, daughter, sister, and friend passed away at home after a valiant four-year fight against lung cancer. Andrea was an amazing woman who lived life to the fullest. She always had a smile and a laugh which lit up any room she entered. She was a devoted wife to John and a loving mother to Jake, Paul, Hannah, and Peter. Andrea had a heart of gold. She was generous to all. She told her close friends that they were family and she treated them exactly that way.

Andrea grew up in Crestwood, New York, the oldest child of Steve and Joan LaSala. She loved her role as the big sister to Mary Lou and Stephen. Andrea’s love of family ran deep. She loved to tell stories of learning to cook at the elbow of her great grandmother and of gathering around the piano at her grandmother’s house with her aunts, uncles, and cousins on Sunday afternoons. Andrea and her mother learned to practice transcendental meditation together. Andrea was always her father’s “Little Girl”. Growing up, she was an excellent athlete and golfer.

Andrea was a dedicated educator. She loved teaching and she excelled in working with children with learning disabilities, many of whom were also socially disadvantaged. Andrea taught for nearly 15 years, including elementary education, special education, and pre-school.

In October 1987, Andrea saw a young man drinking a beer in the living room of the Kelley home in Crestwood, NY. Without speaking to him, she knew right away that he would become her husband. He was John Skudlarek, Captain, U.S. Army. After a two-year courtship—and a marriage proposal on Waikiki beach—Andrea and John wed May 12, 1990. Andrea became accustomed to Army life during four tours of duty, each of which produced a new Skudlarek—Jake (Virginia), Paul (France), Hannah (Washington state), and Peter (Hawaii). Andrea often joked that she wondered what the return move to Virginia would bring.

In 2001, the Skudlareks settled into their first ever family-owned home on Neptune Drive in Alexandria. The family took root in the Old Dominion. Andrea became involved in many community activities, teaching, becoming a Cub Scout den leader, and coaching baseball, softball, and basketball. The family traveled extensively, visiting France, Germany, Spain, Hawaii, Alaska, and Canada. John and Andrea could also be found poolside for swim meets at Mansion House, at Grist Mill Park for soccer games, and at Mount Vernon and West Potomac High Schools for football, field hockey, lacrosse, and track competitions. Andrea was a presence cheering on her kids and their teammates. Andrea proudly attended Jake and Paul’s graduations from James Madison University in 2017 and Hannah’s graduation this year from Virginia Tech. Peter continues his studies at Virginia Commonwealth University.

Andrea was diagnosed with stage-four lung cancer in early 2015. She never lost her zest for life and she refused to let the cancer define her. She bravely endured many trials with grace and courage. Despite the cancer, she visited the shrine at Lourdes, France, hiked up part of Mount Rainier, and led the family on a trip to Alaska. Andrea’s life was one of love, family, and friendship, of achievement and service. A life well lived!

Donations may be made in memory of Andrea to Alice’s Kids: www.aliceskids.org

Offer Condolence for the family of Andrea L. Skudlarek