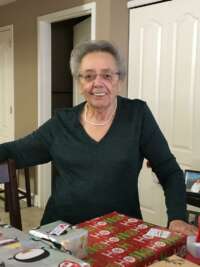 Alice Maxwell Ranero, 86, of East Meadow, NY, passed away peacefully on June 8, 2022, surrounded by her loving family. Born in Brooklyn, NY, she was the daughter of the late Gioachino DiFresco and the late Rose (nee Maio). She was predeceased by her husbands, Alfred L. Maxwell and Victor Ranero as well as her sister Carmela Spatafora (late Dominick), and her nephew Frankie Spatafora (late Kathy).

Alice was loved by all who knew her. She always had a smile on her face, and a helping hand for others. Alice grew up in post-depression Brooklyn. NY in 1935. As a child, life was hard, but she moved on each day with the help of family and friends. After meeting Alfred LeRoy Maxwell in 1958, they got married and had two beautiful children Gary Maxwell (late Pattie), and Gail Maxwell (Andrea). She and Al ran a Mom & Pop Grocery store “3 Musketeers” in Rego Park until 1970. They then became care takers of a funeral home in Richmond Hill. She and Al finally settled in a house in Richmond Hill in 1972, where the children grew up. After Al passed in 1974, she would meet and later marry Victor Ranero. As a widowed mother of two, she supported her children by being a waitress in the evenings. After meeting Vic, she started working in the banking Industry. Alice and Vic later moved to Seaford, NY, where Alice took up a new career in the Real Estate business. She worked for 20 years at SAS Realty in Wantagh., NY. Alice finally retired in 2020 at the start of Covid 19.

After Vic passed in 2012, Alice moved to the Bel Air in East Meadow in 2016. She met new friends in her condo, and has made life long friendships everywhere she went. People that have met Alice will never forget her loving and caring ways.

Offer Condolence for the family of Alice Maxwell Ranero